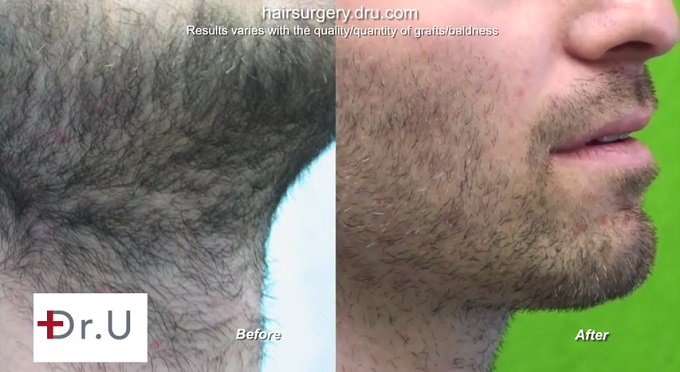 Beard Hair Extraction Wound Healing After 4500 UGraft Extractions – Dr U Patient : This patient who underwent 4500 graft beard hair to head transplant returned to our clinic two years following his last surgical session to shoot his update video. His case also highlights the question of beard hair extraction wound healing. He originally sought Dr. U’s help to fix the poor growth and linear scar which resulted from a strip procedure performed at another clinic. Through standard hair transplant techniques, his goals would have been considered far fetched  and idealistic since much of his head donor follicles had been exhausted. However, since Dr. U has developed the means to extract body and beard hair follicles safely and successfully, the patient was given a reasonable chance to attain the full global coverage that he hoped for by UGraft beard hair to head transplant.

His procedure required a donor supply of 6300 grafts. 4500 of this count was derived from the beard regions on the face and neck. This quantity was needed to help compensate for a depleted head donor and the continued thinning and baldness that was apparent on his crown, hairline, frontal scalp and temples. Targeted objectives for his procedure included the following:

1. correction of the unnatural hair growth pattern and hairline which resulted from his strip procedure

2. creation of temple points to balance and complement his hairline

3. attainment of a dense and uniform coverage in the Norwood 5 regions of hair loss

4. advancement of the hairline and temples to render a youthful looking frame for the patient’s face.

5. concealment of the linear strip scar by inserting follicular unit grafts into this tissue.

At two years following his last surgical procedure at our office, the patient continues to enjoy the abundant global coverage that he had envisioned. Additionally, Dr. U invested careful attention and detail to the framing of the patient’s face by crafting a well suited hairline and temple points in perfect balance and proportion.

The coverage of the strip scar with follicular unit grafts allowed the patient to confidently wear his hair extremely short, as he preferred a buzz cut over all other styles.

Here are before and after photos of his results following his 6300 graft body hair transplant operation:

After extracting 4500 beard grafts, one might wonder how  the face and neck regions would have fared. How is the beard hair extraction wound healing so to speak.

Like many men these days, this patient chooses to embrace the look of facial hair. Even after his BHT procedure where thousands of punches were applied to remove beard follicles,  he regularly sports soft stubble on the sides of his face and on his neck. This is by choice however. In the above photos, the beard area after shaving clean with a blade is spotless, thus answering in this question the question of whether or not beard hair extraction wound healing was good in this patient with a resounding yes!

This was made possible due to the highly specialized design and engineering of Dr. U’s UGraft technology. The punches create specific wound cavity shapes to minimize extraneous tissue, optimize healing, wound closure and the cosmetic appearance of the skin following surgery.

Also, when extracting the beard hair, Dr. U carefully targeted hair in a diffuse array, not regular or geometric patterns. This avoids the creation of obvious looking patches of missing hair on the patient’s face when their beard starts to grow in.

Here are photos which illustrate the excellent healing of the beard region.

During his interview, the patient remarked, “It looks normal. There’s no scar.”

In this update video, Dr. U reviews the various objectives of the patient’s procedure, highlighting the resulting coverage, growth patterns, strip scar coverage, as well as the hairline and temple design.

Additional discussion features the patient’s feedback and the status of both the head and beard regions.

The patient is pleased at how natural his results turned out. This is further supported by the fact that other people did not even notice or point out issues with his hair. The patient confirms that this is “the way I like it.”