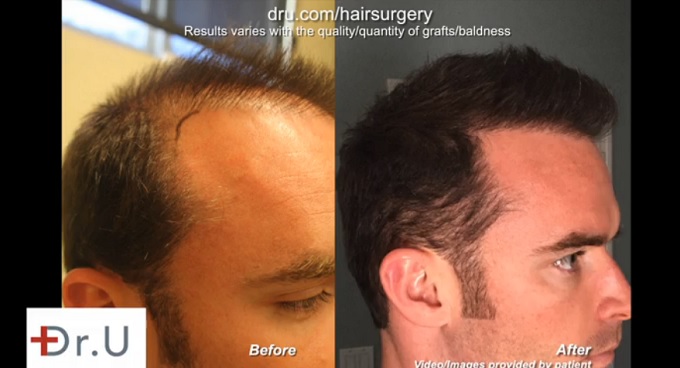 This patient had undergone a strip hair transplant procedure performed at a different office. However his results fell below his expectations with continued signs of baldness, pluggy strands on top of his head and a visible linear scar. Getting another hair restoration surgery to fix his appearance was challenging with far fewer hair follicles left on his head. However, with the help of Dr. U and the expert extraction of facial hair, he was able to benefit from an abundant donor supply of 4500 grafts. At twelve months following his procedure, he is showing remarkable growth and an exceedingly natural looking appearance.

The patient’s strip procedure had produced very minimal yield. His hairline and temples still suffered from recession. Furthermore, the crown area continued to remain bald. And the little growth that did emerge on the top part of his head bore a stereotypical “pluggy” appearance.

As an additional source of concern from his past strip hair surgery procedure, the resulting strip scar was quite noticeable and thus limited the patient’s choice of hair styles.

With an exhausted head donor supply of follicles, fixing these results required another source of grafts besides the scalp. However, this strategy required the help of a hair restoration specialist who is experienced in removing grafts from alternate donor areas.  Therefore, the patient chose Dr. U for his repair surgery.

Dr. U developed technology known as UGraft which was engineered for the safe removal of large quantities of different types of hair follicles found throughout the body. As an additional consideration, it also creates uniquely shaped wound cavities to optimize the healing results on highly exposed areas like the face, neck, legs etc. Even after the extraction of thousands of follicles, Dr. U’s patients are able to rest assured that their skin will look normal and not have to worry about noticeable scarring.

For this patient, Dr. U extracted a donor pool of 4500 grafts from the beard areas, the head and the nape.

Although the full extent of hair transplant growth often takes 18 months on average, this patient is showing amazing coverage and a most natural looking appearance at the one year point. Dr. U had also designed a hairline and corresponding temples to frame the patient’s face, helping him look his absolute best. Care was also taken to insert finer nape hairs along the outer edge and create a gradual progression to thicker strands towards the back of the head.

Read more about this patient’s last update at nine months.

The patient’s expanded donor supply consisting of head, beard and nape hair enabled him to achieve the level of coverage he sought. Additionally, the careful insertion of grafts produced very natural looking growth patterns throughout the scalp, including hairline and temple points which greatly improved the patient’s appearance.

Head and Beard Follicles Used for 4500 UGraft Surgery – 12 Months Later: Patient’s Before and After Video