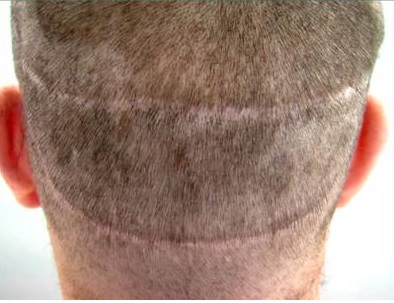 It is generally recognized that the shorter an individual is able to keep ones hair (especially on the back and sides), the less bald one appear. Also, keeping the hair shorter might cut down on the number of grafts needed to diminish the bald look.

Strip surgery scar does present restrictions in ones ability to take advantage of the aforementioned. Many have resorted to FUE implantation to the strip scar in an attempt to solve the dilemma.

Strip scar implants have resulted in variable outcomes. A few pearls that have been implemented in the case of the poster 2208 [hairsite.com poster as of 2007] with the aim of improving yield include the following:

1. Minoxidil The use of topical Minoxidil for a period preceding the date of surgery. This process aims to improve the blood supply to the scar. There is often a problem of compliance with regards to this instruction. Previous reports have cited preoperative application for 2 weeks before the date of surgery.

2. Slit angulation, depth and graft bulb location : The recipient slits are angled hyper acutely and deep enough to place more of the bulbs in the non scarred areas above. This is illustrated in the diagram below.

Strip scar and normal adjacent scalp skin below and above the scar:

Strip scar showing grafted FUSS – (A) & (B) implanted acutely and deeply to reach the subcutaneous layer above the scar. (C) ends in the depth of the scar.

It is expected that FU grafts (A) and (B) from the sketch above would stand a better chance of survival than FU graft (C).

3. Density and Follicular Unit pairing :It has long been conjectured that scars be not dense packed to limit the amount of trauma, as doing so could potentially diminish yield. Most strip scar transplantation have thus far adhered to this principle which remains to be proven. In the case of poster 2208, 35-45 recipient slits were created per sq cms, to which paired FUs were placed. This has given a density of ~70-90 FUs per sq cms. Paired FUs were resorted to in part to allow dense packing while limiting the number of recipient slits/trauma to the scar.

4. Beard Zone hair and Apocrine zone hair : We preferred the use of beard donor sources or apocrine donor sources (armpits and pubic areas) for strip scar treatment for the following reasons:

i. Beard and Apocrine zone hair tends to be of higher caliber (compared to all body hair and even scalp hair for most individuals), hence the much that grows will ostensible impact the scar the most coverage-wise.

ii. Apocrine zone hair tend to be longer, hence stand a better chance of reaching the subcutis above the scar as illustrated in # 2 when the slit are angles acutely enough and deeply enough.

Dr U has published a compelling manuscript on hair transplant strip surgery scar repair in the Journal of Plastic, Reconstructive  and Aesthetic Surgery  a seminal finding on the use of beard hair grafts in repairing strip surgery scars.

In the case of patient 2208, the right 2/3 of the scar were implanted almost entirely with wet zone hair, while the left 1/3 were implanted with only chest hair.

Dr U has published a compelling manuscript on hair transplant strip surgery scar repair in the Journal of Plastic, Reconstructive  and Aesthetic Surgery  a seminal finding on the use of beard hair grafts in repairing strip surgery scars.

In the case of patient 2208, the right 2/3 of the scar were implanted almost entirely with wet zone hair, while the left 1/3 were implanted with only chest hair.

Many would frown at the prospect of using up 2000+ scalp donor grafts in a non balding NW area. The advent of BHT again makes the decision to proceed hence an easier one.

Here is an example of a patient that had undergone a strip type of hair transplant. He had two scars at the back of his head which by strip surgery transplants standards are not bad. However, as usual, strip hair transplant patients are required to keep the hair at the sides and back of their heads long at all time in order to hide the scar, unlike our FUE patients who can crew cut without fear. This patient now wants to have the option of being able to cut his back and sides short. We opted to graft body hair to the grafts. A total of 2000+ grafts were derived from the chest, armpits and chest.

This patient wishes to eliminate the appearance of his strip HT scars by BHT and FUE hair grafting to the scar to the extent that would enable him to adopt a crew cut hair style going forward.