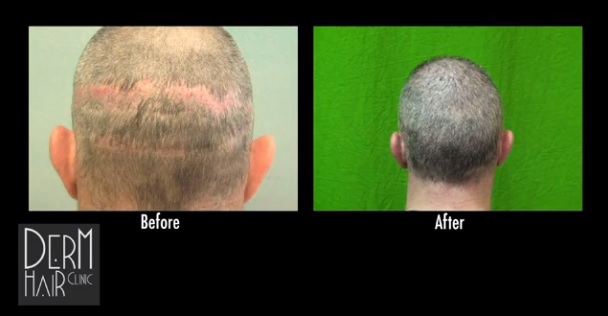 However, there are flaws that you may not be forewarned of in consultation, potential for substandard results that may be downplayed, and scarring that you will only learn of once you fall victim to it.

Strip surgery is the extraction and transfer of an entire strip of flesh from the donor area, being the mid-back portion of the head. This donated portion of the scalp is then dissected into follicular units (naturally-occurring groups of one to four hairs) and divided up to use for implantation into the bald areas of the scalp.

During consultation, the most infamous outcome of strip surgery—the strip scar—may be understated or even avoided, leaving a potential patient under-informed. A surgeon or perhaps an unlicensed consultant might say the strip scar is only “paper thin” and easy to conceal, which it may be. At first. But strip scars will undoubtedly stretch and grow over time. They become not only cosmetically displeasing, but also embarrassing as evidence of a hair transplant.

The Truth About Strip Surgery Hair Transplantation Procedure can be further exposed considering that Strip surgery only takes hair from the mid-back of the scalp, which is innately the thickest hair on the head. Therefore, when the hair is divided up and implanted into the balding area, there is no variance in thickness of follicle from the front toward the back. Because strip hair surgery accesses only thick hair from the middle of the back of the head, it is unable to always produce a soft hairline that appears gradual and natural. Instead, strip surgery will almost always result in a harsh, unnatural-looking hairline.

Due to the nature of strip surgery, the donor pool is confined to only the head. And for those who suffer severe baldness, or have a depleted head donor pool due to injury, disfigurement, or previously botched hair transplantation, this may not suffice. The limitations of strip surgery mean that someone with insufficient head donor hair is a “poor candidate” and this technique cannot be performed successfully on said individual.

The harsh hairline and embarrassing strip scar that result from strip surgery will end up limiting the recipient to longer hair styles, in order to conceal evidence of hair transplantation.

Strip surgery proponents often ask potential patients, “Why would you have a hair transplant only to cut your hair short?”  This statement seems to purposely avert the fact that having a short haircut is ideal for the person with thinning hair. Having shorter hair overall, will reduce the contrast in density from thinner to thicker areas of the scalp. Short haircuts also minimize the need for grafts to be transplanted to the balding area. Contrarily, a long haircut will exaggerate the appearance of baldness in the crown and hairline.

If you are in need of hair transplantation and want to avoid the outcomes of strip surgery, follicular unit extraction may be the method you’re looking for. Contact Dr. Umar for a free online consultation to learn more.