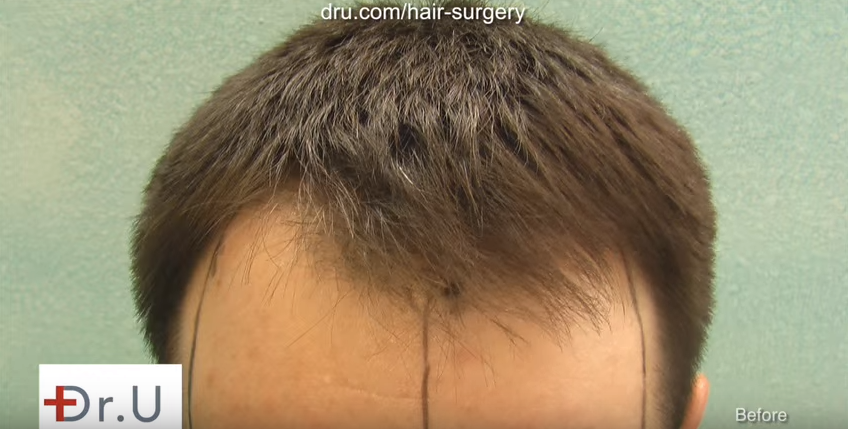 FUE Hair Transplants Are Forever ? As impressive the results that Dr. U has been able to get with his revolutionary UGraft procedure, there is little he can do to fight against the affects of time. Some might think that FUE Hair Transplants are forever. The reality is that because hair loss is progressive in the ungrafted areas, a touch up surgery is necessary to catch up with new areas of baldness for most patients.

Here is the patient’s history over an 8 year period:

In the photos above, you can see how well the original surgery was able to improve his temple and hairline using 3200 grafts when the patient was only 26-years-old. Although the patient received the surgery when he was younger, it is an indication that surgery will be needed further along the road, as documented before.

Eight years later, the patient returned to Dr. U. His hair loss had progressed and the area behind the previously grafted hair began to thin out. A touch up surgery may now be necessary.

All hair transplants should only be done after the patient has reconciled to the fact that future surgery might be needed in the future to cover new areas of hair loss that could result from hair loss progression. The time period would vary, The younger a patient is, the more likely the need could arise even sooner. A ball park period of 5-10 years is middle of the road in this regard. These variables must be highlighted by the hair transplant clinic and doctor in the initial consultation  so the patient understands what they are committing to in terms of possible need for a future surgery to match the progressing hair loss. The assumption that any single hair transplant session including FUE hair transplant are forever  should be dispelled. Although there are some medical options to slow the progression of hair loss after a hair transplant, most patients would invariably require a catch – up surgery at some point in the future.

This patient had his initial surgery at a young age, which means that a future touch up surgery was very likely.

The photo below shows how even after a successful surgery, there can be a clear divide between the old hairline and the new one.

The following photos show how the patient’s hairline and density was stable 8 years after surgery, but the areas behind the transplanted area is showing evidence of thinning for which a touch up surgery would be required.

Back of the head 8 years later.

The patient was able to regain the confidence he felt 8 years earlier after the initial surgery.

Although it may seem like FUE Hair Transplants are forever, it is not a hard and fast rule.

The video above illustrates one of the many realities that come with a hairline transplant. It should be noted that Dr. U’s surgery was able to last this patient over 8 years before he required any type of touch up surgery and the new results are equally as impressive. Similarly, even though the patient required touch up surgery, much of his hairline and temples remain fully intact. This was largely in part to the FUE shave test that ensured the patient’s nape hair would hold up well over time. Still wondering if FUE Hair Transplants are forever?

Know all about FUE Hair Transplants