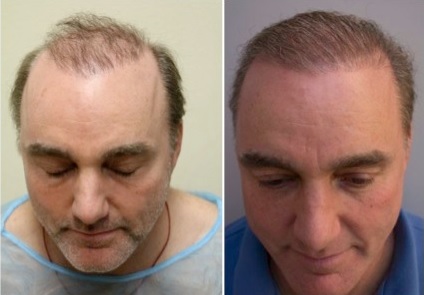 UGraft Body Hair Transplant with 5000 grafts: Body hair transplant by UGraft advanced FUE enables highly trained FUE surgeons to perform miraculous repairs on prior hair restoration procedures that failed. But during the 1980’s, this advanced technique was not yet invented. The only surgical options of the day were rough and unrefined. Thus, there was no way to amend the often botched growth and damaging scars people incurred at the hands of these early methods. Bill, a man who encountered this adversity, shared his deeply emotional hair restoration journey on a public blog, it all culminated in to his UGraft body hair transplant with 5000 grafts with a happy end to the story.

It was July 2011 when Bill went public with his heartrending story on Hair Peace Foundation. He divulged his personal pain, insights, and reflections as a cautionary tale for all who suffer hair loss. The initial pain he felt was due to the early onset of pattern baldness, at the young age of 20. And then a decision to undergo hair transplant in its rudimentary stages led to the nightmare that would consume most of his twenties. And it would be two more decades after that before body hair transplant came along

Bill recalls, “[The surgeon] drilled holes in my head the size of pencil erasers and replaced the empty pits with hair grafts taken from other parts of my head.” But the doctor promised him his new hair would soon be hanging in his eyes. “I clung desperately to that hope,” Bill shared, “which supported me until it slowly dissolved, leaving me alone with a self I hated.” What he had left were big round scars across the back of his head, meager density, and plugs spanning his hairline. The results had worsened his appearance and exhausted his scalp donor supply. With the evident scarring, he could no longer even shave his head. He fought the feelings of regret, grief, and deep depression.

He spent most of the next decade hiding under the cover of a hat, rain or shine. Once he eventually grew the courage to try to move forward with his life, he knew he had to start by taking off the hat. Through this, he was met with staring strangers, rude questions, and ridicule.

Body hair transplant (BHT) was invented in the 1990’s, with most of its greater development happening during the 2000’s. DermHair Clinic’s Dr. Sanusi Umar, a surgeon specializing in FUE hair transplant and a spearhead of BHT, offered to evaluate Bill’s disfigurement. He and Bill would come up with a plan and a graft count to correct the damage done thirty years prior. It was decided that a UGraft body hair transplant with 5000 grafts would assuage the problems significantly.

The plan was to use body hair transplant using advanced follicular unit extraction methods of the UGraft which takes out the follicles using patented micro punches. The tiny size of each UPunch wound makes body harvest safe and effective, expanding the donor pool while yielding negligible scars. The areas up for follicular consideration include the beard, chest, shoulders, stomach, arms, and legs. However, BHT is usually a consideration for cases like Bill’s, in which head hair has been depleted.

Dr. Umar extracted the old plugs from Bill’s scalp and put a modest 5,000 beard and nape hairs in their place. Thick beard follicles were selected to create density, while fine nape hairs crafted a handsome, mature hairline. Eighteen months following the body hair transplant surgery, Bill’s growth already accomplished his goals. The improvement is considerable, keeping in mind his extreme hair loss and scalp damage. His nightmare began thirty years ago, and with today’s advancements in hair restoration technology, it’s finally over, Thanks to his UGraft body hair transplant with 5000 grafts done by Dr U.