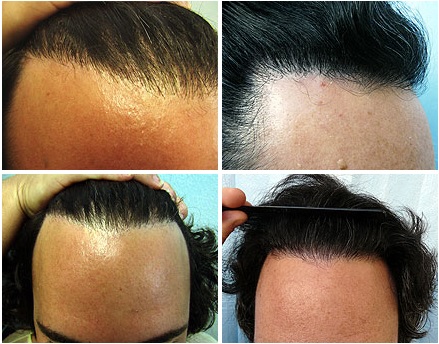 Hairline Restoration : The hairline is defined as the area where the vertical, flat, and naked skin of the forehead begins to round onto a horizontal plane to adjoin with the hair of the scalp. This same area spans across the top of the face, meeting the temporal recesses on either side where it flows into the temple points.

But our hairline is yet so much more. It is the critical wall of hair that provides each unique countenance with proper balance, serving as the face’s frame. Without it, our facial-skeletal proportions are off kilter. The forehead becomes oddly large, putting the hair loss victim in a cosmetic dilemma. A quandary so distressing it frequently leads to mood swings, deep social anxiety, and even depression.

The bulk of hair loss among women and men is the materialization of androgenic alopecia, or pattern baldness. Passed through the afflicted ancestral line as weak androgen receptors within the X chromosomes, the hereditary influence makes scalp hair especially sensitive to dihydrotestosterone/DHT. Specific follicles become so sensitive that this commonplace hormone demolishes the hair and, in turn, generates different degrees of baldness.

Hairline Restoration : CONSIDERATIONS OF A PROCEDURE

Male hairline transplant procedures usually revolves around creating coverage at the hairline and crown. But the surgeon must take numerous significant elements into account when restoring either site. Restoring the hairline demands an understanding of the following factors:

The hairline positioning is what will reinstate proper facial proportions, so the practitioner must create the line with care. An outlining tool such as the Rule of Thirds is a useful starting place, but the practitioner must depend on his or her artistry in order to accurately place the hairline for each individual patient. The position additionally accounts for the temporal recesses, without which it is not possible to construct a real-looking hairline. Each hair subtly changes direction and angle where the hairline transitions into the temple points. The graft placement at this point must be seamless and smooth.

Shape of the hairline is one more artistic element that nature customized to each person’s specific facial structure. Restoration  surgeries must imitate nature from this aspect, crafting, as one example, a symmetrical outcome.

Density involves how the hair is spaced along the hairline as well as the placement pattern. For example, for a lot of density the grafts may be placed close together (which necessitates a larger harvest for globale coverage) or spaced farther apart for moderate density; the grafts may be placed in a dense straight line or a soft zigzag. Additionally, if the practitioner creates a hairline position nearer to the eyebrows, nature says that the hairline should be a bit denser. And equally visa-versa—granted, this is rule is not concrete and must be tailored to the individual.

Hair texture is comprised of coarseness, thickness, and curl. The traditional donor source for harvest is the mid-rear scalp—where hair texture is naturally thickest. These grafts generally create unnatural-looking and harsh results. Sophisticated hairline restoration employs donor follicles from the nape of the neck, or even the legs, (possible only with FUE) because of their finer disposition.

Ethnic background is also a consideration when it comes to texture. While African Americans usually have curly hair, so Asians usually have very thick hair, with fewer hairs per square centimeter of scalp. Asian hair follicles from the mid-rear head undoubtedly proffer abrasive hairlines. Thus, for patients of Asian decent in particular, the surgeon must employ nape hair or leg hair.

Depend on photos and videos as proof of superior surgeons and superior treatment. Looking at before-and-afters of those who have been treated before gives you the chance to scrutinize the texture of hairs used, shape, positioning, and density—the graft placement and selection that will determine your future outcome. Quality photos and videos of hairline restoration will be well-lit and in focus, displaying the hairline from the front and both sides of the face. Be cautious of images that look like they’ve been edited or photo-shopped to enhance the result.

FUE (Follicular Unit Extraction) was used in the following patients to help restore their hairlines.

What is traction alopecia exactly?

Traction alopecia happens when a person wears extremely tight hairstyles on a regular basis for an extended period time. This frequent, abrasive pulling on the hair leads to scalp damage and scarring, causing hair to fall out at the anterior and posterior hairlines. Causal hairstyles include braids, cornrows, weaves, and extensions.

What additional causes of hair loss are there, not specific to the hairline?

Some additional hair loss sources are malnourishment, pregnancy, severe stress, hormonal changes, diabetes, thyroid dysfunction, lupus, and trichotillomania. Most of these do not create a need for hairline restoration.

To view another patient example, click here. This is another case where the hairline was repaired to produce a more youthful looking appearance.