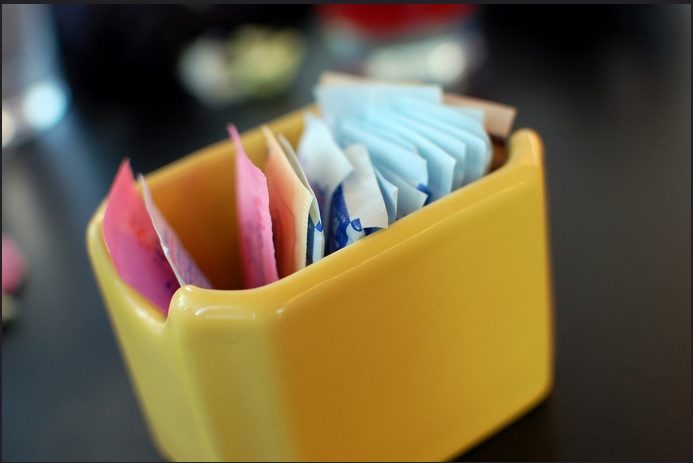 Connection Between Aspartame and Hair Loss

Connection Between Aspartame and Hair Loss : Researchers are finding that many environmental toxins are linked to hair loss. Aspartame is a popular sweetener included in many food products.  Yet it is known to have many detrimental consequences on the body. And there seems to be growing support for the association between Aspartame and sudden, unexplained loss of hair.

Connection Between Aspartame and Hair Loss

Dr. U receives frequent inquiries from individuals on why they are losing their hair and some have wondered if a possible cause may include the effect of Aspartame.

Aspartame is an artificial sweetener. Since it has fewer calories than regular sugar, it has become a popular sweetening agent for diet drinks, shakes and the like.

It was approved by the FDA in 1974 for use as a food additive. This decision was then recanted just a year later in 1975 due to emerging research which highlighted it’s negative side effects. Three scientific FDA advisors issued formal warnings to advise against the use of aspartame in consumables.

However, in 1983, the FDA Commisioner, Mark Novitch MD approved its use in carbonated beverages.

The FDA listed 92 adverse reactions associated with aspartame. These include: memory loss, confusion, depression, anxiety attacks, insomnia and seizures. Hair loss, thinning and baldness were also included on this list.

Healthy Holistic Living reports that 80% of all FDA complaints issued by regular consumers have to to with negative reactions due to this artificial sweetener.

Aspartame has been linked to birth defects, diabetes, and even brain cancer, among other health ailments.

Organizations including the Center for Disease Control have been working diligently to bring greater public awareness to the potential hazards of aspartame.

The compound is made of two basic components:

The phenoalanine molecule has been synthetically manipulated to carry a methyl group which is responsible for the sweet taste we experience. Once in the body, this group is easily broken off, forming methanol.

Methanol is then transformed by an enzyme called alcohol dehydrogenase into formaldehyde which remains free floating in the body, where it can easily affect DNA and protein structures.

Connection Between Aspartame and Hair Loss:  How Does Aspartame Cause Hair Loss?

At this time, experts are not certain exactly how aspartame affects the follicles and causes hair to fall out.

According to Janet Star Hull who counsels victims of aspartame toxicity believes that methanol is the factor which leads to hair loss.

According to It is quite possible that the  formaldehyde which results from methanol breakdown creates a form of stress which causes follicles to enter the telogen resting phase.

On her website’s forum section, many of Dr. Hull’s users have reported experiences such as:

At the moment, there are very limited research studies which support solid conclusions about the effects (or deficits) of specific foods on hair loss. However, there are many examples of individuals who will notice certain patterns when they eat certain foods or drinks or stop consuming these items altogether, like the users on Dr. Hull’s website Dr. U believes that it is important for individuals to be vigilant about noticing these patterns, instead of dismissing such phenomena due to the lack of research findings.

Sometimes dietary factors may hold the key to an individual’s unexplainable hair loss. These could be the sole cause. Or they could speed up the rate of shedding in those who are genetically predisposed to pattern baldness.

Keeping a food diary can be a good way to keep track of what you are eating. At the same time, it is a helpful tool for documenting the time frames when you are noticing more hair loss than usual. By going back through your records, it may be possible to find correlations between what you are eating (or not eating) and experiences of extreme hair loss.

If keeping a written journal does not seem convenient, consider looking for an app that can help you stay on track. One example is Speech-to-Text which allows you to speak into your phone’s microphone and automatically turn it into dictated notes. Also consider looking for other apps that best suit your needs.

If you are a fan of diet colas or shakes, you may want to consider reducing your intake or stopping your consumption of these beverages due to the aspartame content. Your motive for doing so should not only include hair loss, but other health risks as well.

Many people have become aware of the potential dangers of aspartame. The Wall Street Journal and other sources have reported that the sale of diet soda has dropped well below their regular counterparts. At the same time, many new low-calorie artificial sweeteners are being developed instead. However, no one knows for sure if these too carry negative health effects like Aspartame.

Again, break down products may entail adverse consequences to the hair follicles, which are very sensitive organs that often react to stress by going into a resting phase where hair stops growing. This is one way to help them conserve energy for recuperation purposes instead of manufacturing new hair shafts.  Hair loss typically occurs about three months later.

Targeting external factors leading to hair loss may simply reduce the rate of shedding. This is likely to be an effect in those who are genetically predisposed to pattern baldness (androgenic alopecia). Or it may offer a more permanent and complete solution in others.

Dr. U emphasizes that hair loss is actually a multifaceted phenomenon at the physiological level. And different causal variables will affect people differently. So it’s important to be open to the possibility of many different factors contributing to your condition, rather than just one.

The Scoop on Vitamins For Hair Loss