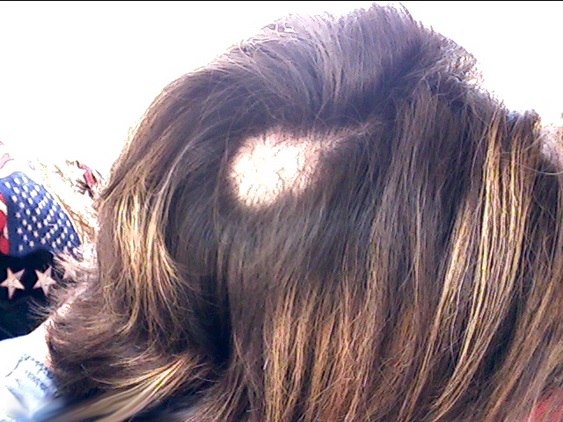 Hair Loss Caused by Pathological / Disease Conditions March 10, 2010December 27, 2018
The hair disease trichotillomania is an impulse control disorder characterized by the uncontrollable impulse to pull out one’s own hair or twist the hair until it breaks off. While other areas of life continue and function as normal, continual hair pulling becomes unmanageable to the point of bald spots, and noticeable thinning. This disorder can cause significant loss of hair in both men and women, although women are four times as likely to be affected. Most commonly, hair is plucked, pulled, and/or twisted from the eyelashes, eyebrows, and scalp.

Researchers believe that biological and behavioral elements combined are the cause of the hair disease trichotillomania. A chemical imbalance of neurotransmitters—the things that assist nerve cells in getting messages to the brain—can adversely alter the brain’s ability to control impulses. The sufferer may pull hair without the cognizance that he or she is doing so. This action is thought to somehow be a gratifying release of tension for those who do it.

The result—thinning hair—is often a source of shame or embarrassment. Suffers become good at hiding the disorder and it then becomes difficult for family, friends, and even medical professionals to detect. Because of this, someone with trichotillomania may go without proper treatment, which can impair social functioning as another long-term result.

How Is The Hair Disease Trichotillomania Treated?

Treatment of this disorder requires much more than simply restoring the lost hair. Without addressing the psychological root of the issue, re-grown hair is likely to be pulled out again. Trichotillomania often coincides with depression or anxiety. Once the problem is diagnosed and proper action is taken (therapy, anti-depressant medication, etc), then hair restoration options should be considered.