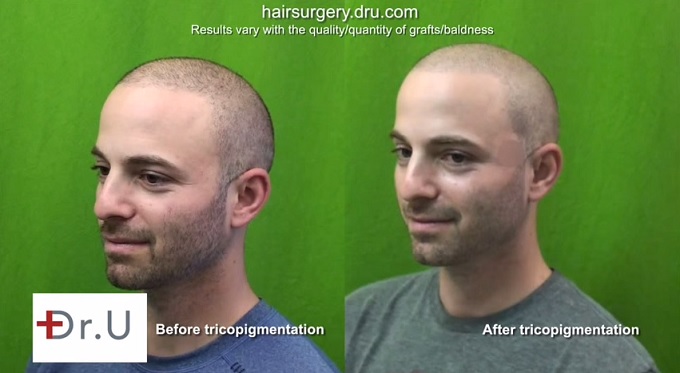 Hair Density Improved with Body Hair Transplantation & Trichopigmentation : This patient had undergone a body hair transplant to repair poor results from a past strip surgery conducted at another clinic. Achieving his desired coverage was accomplished using a donor pool of 6300 grafts. 4500 came from the beard area. Although he was quite pleased with his outcome, he decided to improve the appearance of his hair density through a scalp micropigmentation smp method known as Trichopigmentation.

Much like tattooing, trichopigmentation and smp apply pigment below the skin’s surface using needles. The objective is to create an array of tiny dots in 2D that resemble the look of newly grown stubble.

With Trichopigmentation, the pigment is deposited much closer to the skin’s surface, compared to conventional SMP. This prevents bluish or greenish discoloration (known as the Tyndall effect) which occurs when light bends as it passes through the skin which contains tiny particles of suspended pigment.  Through superficial injections of pigment, the color is able to remain true and natural looking in appearance.

Also Trichopigmentation uses organic pigment which degrades on its own after two years. Therefore, patients can feel free to change their minds about having pigment on their scalp or elsewhere on their body.

Trichopigmentation As An Adjunct to Body Hair Transplantation

Although the use of scalp pigmentation can be applied to bald areas of the scalp, a far more natural looking appearance can be achieved when used to enhance the outcome of a hair transplant procedure. This gentleman’s results demonstrates this.

Trichopigmentation provided an effective means for improving the appearance of the patient’s density. It helped create a more even looking distribution of hair.

Dr. U notes that the quality of these results would not be possible using pigmentation alone, without the presence of hair growth.

These before and after photos show his outcome after two treatments.

Dr. U had applied pigment spots to the patient’s scalp, mindful to replicate the natural array of hair growth.

Trichopigmentation was also applied to the strip scar. The objective was to improve the appearance of hair density here as well.  These photos show the strip scar became even less noticeable through the use of this pigmentation method in conjunction with beard hair graft insertions.

It should be noted that strip surgery changes the anatomy of the scalp by removing a section of the surface area.  Therefore, an inevitable line can be expected to be visible, especially with shorter hair cuts.

As this patient shows, grafts can be inserted into the scar tissue to reduce the line of emptiness that appears from the scar tissue. And through the use of Trichopigmentation, the enhanced appearance of hair density can further reduce the visibility of the scar, while rendering a very convincing looking result.

In this video, Dr. U discusses the use of Trichopigmentation as a complementary treatment to body hair transplant surgery. The patient also provides feedback in his own words, saying, “I think this is probably the only combination of procedures that could have achieved these results from any doctor.” He also added, “It looks so natural that nobody has commented.”