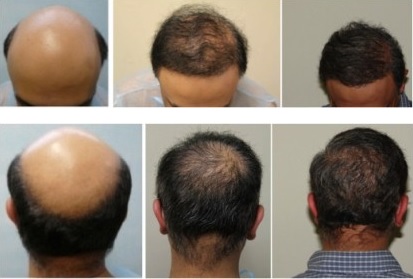 Treatment for Severe Baldness : Losing one’s hair is a demoralizing experience. However, of the 40 million men in the United States suffering with hair loss, many of them are on the low end of the Norwood scale. NW 2’s and 3’s have a plethora of hair restoration resources at their fingertips, and can often be restored to youthful thickness. It is the NW 6’s and 7’s who suffer the worst, because there are vastly fewer treatments for severe baldness.

As hair loss progresses, the topical medications, finasteride pills, and hair transplant technologies all begin to slip away due to their limited restorative capacity. Until recently, the high end of Norwood’s scale has remained the virtually uncharted sea of treatments for male pattern baldness. But now, despite the endless futile solutions, there is an answer on the rise—new advancements in Follicular Unit Extraction.

It stands to reason that you should first be informed of what won’t work. This includes:

Minoxidil, commonly bought and sold over-the-counter in the form of Rogaine, is a vasodilator proven to stop hair loss. It should be applied topically twice per day to the affected area. Although it is FDA-approved, its capabilities are limited. This would not be a viable treatment for severe baldness because it must be used in the early stages of hair loss to work and, even so, is only effective at the crown—not at the hairline. In addition, while it stops hair from thinning, it does not always re-grow the hair that’s already gone.

Finasteride, also approved by the FDA, is a 1mg pill taken once daily. This prescription medication generally comes in the brand name Propecia and stops hair loss by inhibiting the hormone DHT. Similar to minoxidil, finasteride would not be a reasonable treatment for severe baldness since it only works when hair loss is detected early on. This medication does not prevent loss along the hairline and is contraindicated in women.

Strip harvesting and other “traditional” hair transplant methods are simply limited in their donor supply. Such techniques extract donor hair only from the “safe donor zone” which is typically the mid-rear scalp.  This type of donor harvest is futile, since the patient has little to no hair remaining on the scalp. In fact, severely bald individuals are considered poor candidates for these traditional methods; any surgeon knows that the resulting yield would prove grossly inadequate. In the best-case scenario, the patient would end up with pitifully sparse density or with the hair more densely packed in one area, creating an island of hair. Either result would likely be more strange looking and embarrassing than the baldness itself.

THE SOLUTION: GROUNDBREAKING USE OF BODY HAIR FOLLICLES

The Annals of Plastic Surgery, the Archives of Dermatology, msnbc, and the New York Times have all recently acknowledged the revolutionary resource that is changing the future of hair restoration. Body hair transplant, or BHT. It sounds odd, but it works. Through follicular unit extraction (FUE), donor hair derived from outside the traditional zone—from the beard, shoulders, chest, stomach, arms, or legs—creates a vastly expanded source that has been discovered and put into practice in the past ten years.

At first, though it was the single-standing treatment for severe baldness, BHT got plenty of flack; a profusion of skeptics or people claiming it was somehow immoral. People criticized the long-term graft survival rate and yield potential. They worried about scarring and whether the hair would blend in on the scalp. But as body hair transplant became more sophisticated and refined many critical voices were silenced.

True, graft survival and yield may not be as high as with scalp donor follicles, and body hair does tend to be slightly coarser. But the numbers are high enough (tests have shown 80% graft survival) and the hair pliable enough that BHT has restored many scalps and revived the quality of many lives.

UGraft is a highly sophisticated FUE tool used exclusively by Dr. Umar of DermHair Clinic. Dr. Umar is the world leading practitioner and a pioneer of BHT. He developed his signature UGraft tool through years of experience—learning how to provide the best results with limited transection and graft burial, and minimal scarring.

Dr. Umar has used his uGraft to successfully repair multiple patients who’d been disfigured by previously botched hair restoration surgeries. He has also restored an astounding amount of density to NW 7’s who’d had no hope before.

Here is a video of this patient’s follow up video, where 4000 additional donor grafts were harvested and inserted to improve upon the coverage of the first procedure.

Here is another example of a Norwood 7 patient who was able to benefit from a hair restoration surgery using grafts taken from the beard area.

BEING CAREFUL WITH TREATMENT FOR SEVERE BALDNESS

Prospective patients should bear in mind that not everyone is a candidate for body hair transplant.

As with all types of surgery, individuals must be careful and do his research. It is paramount to find a surgeon who is widely practiced in both follicular unit extraction and body hair transplant—and who has performed with enduring success. Restoring a severely bald scalp means the surgeon must have the artistry and vision required to reconstruct an entirely absent hairline and crown, and he must have advanced FUE tools to do the job.

Another thing for the patient to consider is his expectations. Individuals undergoing treatment for severe baldness must understand that they cannot expect the resulting density FUE would restore to someone with early hair loss. While an NW 3 might reasonably expect total hair restoration, a Norwood 7 patient should aim to be content with a resulting NW 2 scalp.