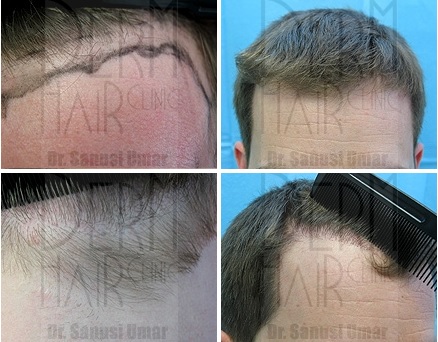 The face is the first thing people notice, and the hairline its frame. For someone suffering hair loss, perhaps the worst part is when the hairline begins to fall back, rendering the forehead larger than it should be and thus distorting the natural proportions of the face. The frame is no longer performing the job of providing aesthetic balance. Fortunately, technology has evolved such that there is a restorative solution: hairline transplant using follicular unit extraction can build a full, natural-looking frame anew.

The hairline marks where the bare skin of the forehead ends and scalp hair begins. In nature and in the absence of hair loss or any familial variations, it occurs at the point where the flat forehead curves in to form the horizontal plane of the scalp. It curves from one side of the face to the other, where the temple points join it to form the temporal recesses.

Recreating this important facial feature is done through surgical hair restoration—wherein the surgeon harvests donor hairs from the patient’s scalp (or in some cases, beard or body) to implant along the hairline. This method of restoration picks up the slack where pharmaceutical methods fail; for example, Rogaine and Propecia, the two most popular and only FDA-approved non-surgical treatments, are both proven ineffective at preventing hair loss along the hairline.

Surgical hair restoration is today’s only answer to this rampant cosmetic problem. But a successful hairline transplant is not as simple as moving donor hair from one place to another. A hair transplant surgeon must take certain natural design factors into account to arrive at the ideal hairline for a patient. A cookie cutter approach to this essential aspect of restoration would not do for the savvy and discerning hairline transplant recipient.

Thus, when designing a hairline, a skilled and experienced surgeon must balance:

POSITION OF THE HAIRLINE

The Rule of Thirds is the first point of guidance for hairline design. It defines a non-recessed hairline as being positioned at a point above the eyebrows that is equivalent to the midway point between the eyebrows and chin. However, this is a mere guideline and must be used with discretion, tailored appropriately to the individual during consultation for hairline transplant. Factors to take into account are how the patient’s goals reconciles with future hair loss and total life time donor reserve.

Temple recesses are also a part of hairline positioning. The temple recess is the curve at the place where the temple points meet the hairline. To make the flow from hairline to temple hair happen smoothly, the angle transition between forward-pointing and backward-pointing hair must be accurate. The delicate nature of this area becomes problematic for the inexperienced surgeon; whether attempted or completely avoided, a subpar aesthetic outcome is most often the result of novice work.

Here is an example of poorly executed temporal recesses corrected by Dr. Umar:

It is also impossible to build an aggressive hairline credibly without mastering the art of temporal recess construction. Here is another example:

SHAPE OF THE HAIRLINE

Nature has customized the shapes of our hairlines to fit our facial skeletal anatomy. Hairline transplant performed by an experienced surgeon mimics this natural customization.

DENSITY OF THE HAIRLINE

Density of the hair distribution, or placement of hair at the hairline, is also varied. The surgeon must carefully discern the spacing of each follicle and decide between creating a straight hairline or one with a subtle zig-zag pattern. Positioning also has a say, as someone with an aggressive hairline position might have more density in this area. In fact, the more aggressive a hairline position (the closer to the eyebrows), the thicker the density should be with regard to hair placement. But this again is a delicate dance that must be treaded carefully.

Here is an example of an aggressively youthful hairline transplant by Dr. Umar.

Texture of the hairline is determined by the donor source. Ultimately, the surgeon must choose the right donor source to get the hair texture that will proffer the best outcome. Traditionally, donor hair comes from the mid-rear scalp; but this is where hair naturally grows thickest in texture. A harsh hairline usually results from using this hair, thus, finer hair from other areas such as the nape, peri – auricular areas and finer body hairs is more ideal and this is a process pioneered by Dr U. Building a soft, gradual progression of hair is arguably the most important factor for a hairline transplant to appear natural.

Ethnicity also comes into play with patients who have naturally thicker follicles, such as people of Asian descent. In these patients, using hair from the traditional donor areas will especially result in a harsh looking hairline. Dr. Umar solves this problem by using hairs closer to the nape areas or finer non-head hair, such as hair from the legs. , The New York Times, and MSNBC online have all published reports on Dr. Umar’s use of leg hair in hairline transplant.

To view another example of an actual patient hairline restoration, click here to read more.

Read on Dr U’s ASj publication on the creation of natural hairlines and temples using nape and peri-auricular hair.